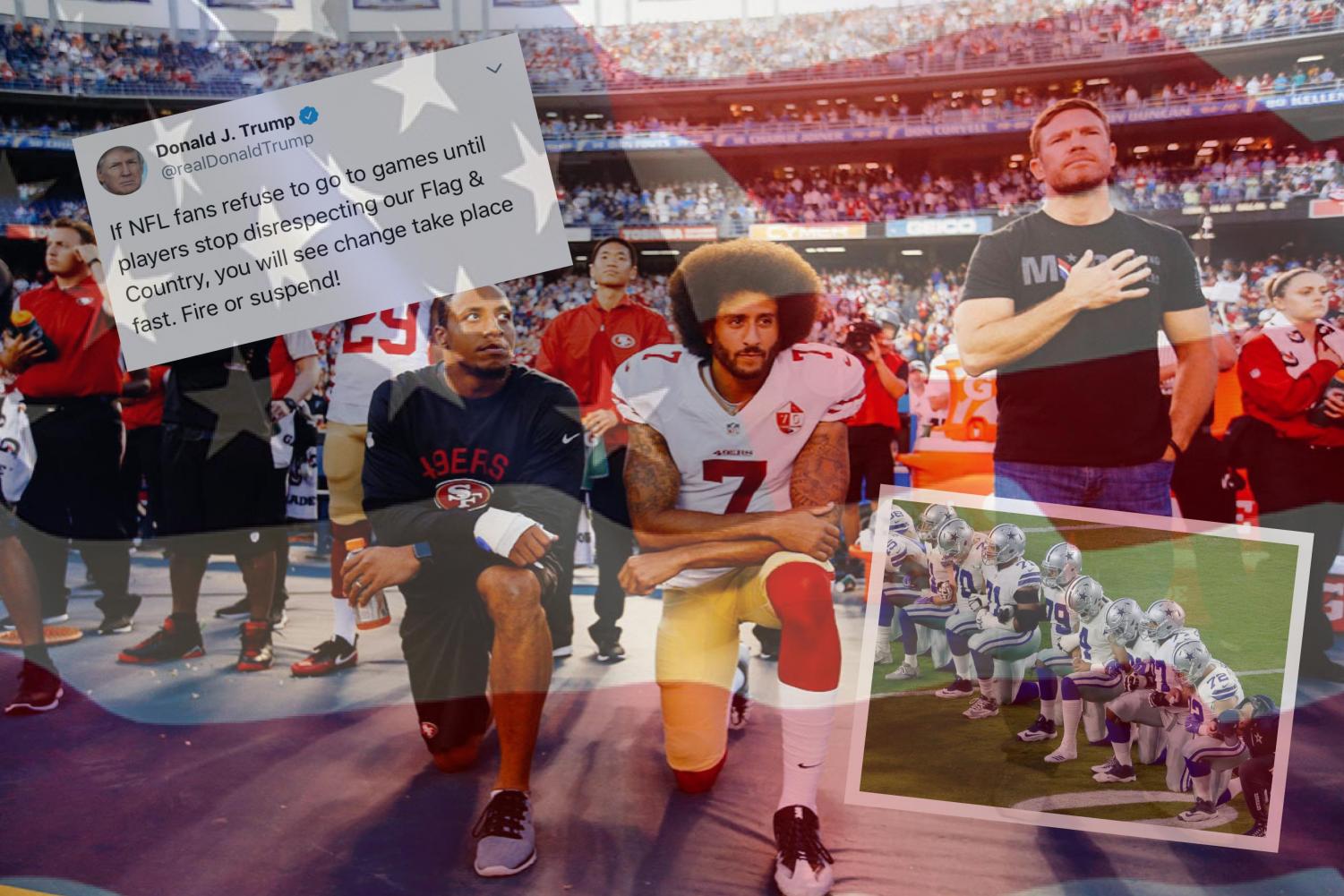 As NFL players take a knee in protest during the national anthem, a debate rages through the country over whether they are advocates for change or simply divisive by choosing this forum. LionNationOnline presents both views to better explore this complex issue.

The First Amendment states, “Congress shall make no law respecting an establishment of religion, or prohibiting the free exercise thereof; or abridging the freedom of speech, or of the press; or the right of the people peaceably to assemble, and to petition the Government for a redress of grievances.”

Therefore, we all should be able to agree that athletes, entertainers, politicians and everyday Americans have the Constitutional right to peacefully protest in any lawful manner they deem necessary to promote their cause or bring awareness to a particular issue. Kneeling during the playing of the national anthem most certainly constitutes a lawful form of peaceful protest.

I would be remiss if I didn’t talk about and celebrate the great strides this country has made in race relations over the years. We’ve moved from the internment of Japanese-Americans during World War II, systematic denial of constitutional rights of other Americans during Jim Crow, to the election of the first African-American President. Americans have a lot to be proud of; however, we still have a very long journey in front of us when it comes to racial harmony and social justice for people of color.

Lately it appears that the journey towards racial harmony and social justice has stalled and been deferred. Bringing awareness to such delays is one of the primary reasons behind the anthem protests. This protest will have missed the mark, if as a result we as a country fail to engage each other in honest and empathetic dialogue and action on how to remove systemic racism, oppression and subsequently secure justice for all Americans. Our efforts will require sincere discussion and reflection and not name-calling and finger-pointing.

What initially started as a protest by one football player to shed light and bring awareness to racial inequality and oppression (police brutality) of people of color has been hijacked by calls for patriotism and respect for the American flag.  In terms of patriotism and respect for the American flag, I submit to you that those who kneel during the national anthem are no less patriotic and no more disrespectful to the flag than those “patriotic” Americans who chose to fly our American flag at half-mast or upside down upon the election and re-election of former President Barack Obama.

Please note that “peaceful protest is a cornerstone of our democracy.” Whether it was the Boston Tea Party or the fight for Women’s Suffrage or the Civil Rights Movement, our country has been profoundly shaped by the actions of protest. In fact, the Protestant religion that many of us are members of was born out of protest.

To those who say kneeling during the national anthem is the wrong way and the wrong time to protest, please remember the point of most protests is not to be well-received or accepted, but to stand out and be noticed.

Maybe the anthem protests have run their course and a new strategy is required, but this country is better for the protest. We can’t sustain America’s greatness without a concerted effort to remove racial inequality, systemic racism and oppression within the borders of this great country.

Finally, in spite of the challenges that lie ahead and our differences of opinion in terms of where our country is heading, ultimately we all just want to proudly declare, like Langston Hughes, “I, too, am America.”

As the national anthem echoes through football stadiums around the country, the sport that has spent years bringing the nation together, now divides. Many players have chosen to engage in a political protest against racism by kneeling during the anthem. In turn, they have started a firestorm of controversy.

It started with one man. San Francisco 49er Colin Kaepernick sat during the national anthem at the first two preseason games of last season. He said he did so “to stand with the people that are being oppressed,” particularly in response to police brutality toward people of color. To make his statement more noticeable, he then began taking a knee during the anthem. Before long, at sporting events around the country, athletes sporadically joined in by kneeling or raising a fist. But, as the season rolled on, media attention faded.

Fast forward a year, and there is a new resurgence in the protest bringing it back to the forefront of the media stage. Add to that, President Donald Trump’s pronouncement that anyone who kneels during the anthem should be fired or suspended, and now, with every change of the channel, photos of protests flood the screen. Each opinion is seen as a bold statement. Standers are called unsympathetic, kneelers are called ungrateful to those who have fought to preserve the country and its freedoms.

The flag is the greatest symbol of America, and many have given their lives to protect it. It represents freedom and hope, the beauty of the American people and the greatest country in the world. Just because football players have the Constitutional right to kneel for the anthem doesn’t make it the right thing to do. Though the actions of the protesting players do cause national conversation, kneeling during the anthem is not well received by much of the public and has yet to bring about any positive change.

For many, professional football players represent the American values of hard work and determination and the successful pursuit of the American dream. These football players also represent the National Football League, an organization that has made millions portraying themselves as an All-American institution. Many fans don’t appreciate players using the NFL sidelines for their protest platform. As a matter of fact, a recent Seton Hall Sports poll found 52 percent watching fewer games and half of those point to anthem protests as the cause. If football players feel there are injustices in the country, there are better forums and positive ways to raise awareness and promote change.

Instead of creating rifts throughout the nation, football players could use their influence in ways that work toward unity. Whether that be peaceful protest events such as marches or speaking out alongside the victims of injustice or raising money to better at-risk communities, players are more likely to bring real change in ways that don’t alienate a good portion of America. Many NFL players already have foundations that raise money to clothe, feed, educate, provide athletic opportunity and otherwise care for their communities in positive ways. By focusing their efforts on active, everyday change, they influence the nation from the ground up.

The Dallas Cowboys made a team decision to kneel together prior to the anthem. In doing this, they validated and recognized the importance of the racial injustice issue in a unified manner. They also showed the importance of respecting the flag and the overwhelmingly positive aspects of the United States of America. It was a win-win action.

Racial injustice is a serious, complex issue. It’s going to take a united stand against it to stop it. Protests such as kneeling during the national anthem only divide and alienate and are counterproductive. If NFL players, or anyone else for that matter, really want to influence the nation, they should do something that unites and lays out action steps to real change. Just because you have the right to take a knee doesn’t mean you should.