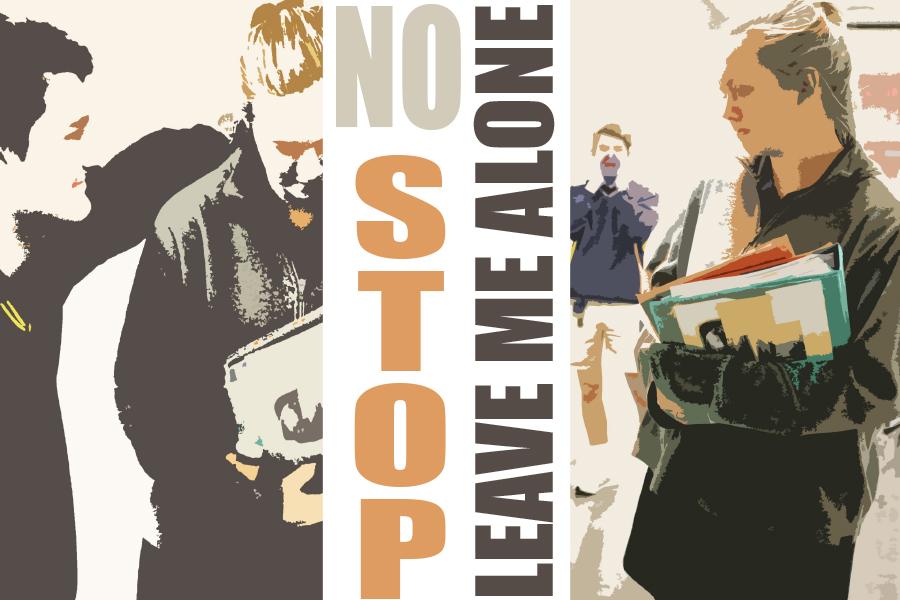 You are at IHOP with friends enjoying a short stack of pancakes. A friend walks in, so you get up to greet him. He leans in for a hug. He makes a crude remark about your figure. You pull back and mentally shake it off as a joke. But you can tell by the way he looked at you that he wasn’t joking. With no warning at all, you experienced a form of sexual harassment.

Many who have experienced this sort of treatment do not speak up because they are afraid or ashamed. It’s common for a victim who reports an incident of sexual harassment to be dismissed due to the lack of awareness and knowledge of what sexual harassment is. Thus, leading those in authority to dismiss the experience as a joke or misinterpretation. This only worsens the impact on the victim.

Sexual harassment among young people has grown through the prevalence of cell phones and social media. In the journal, Cyberpsychology, Behavior, and Social Networking, a survey of 1,000 students found nearly 30 percent had been sexually harassed through unwanted sexual or gender degrading comments on social media in the last six months.

Junior McKenzie Reynolds received a Snap Chat from someone she didn’t recognize. When she opened it, she found a graphic message with a link. “I think it is quite interesting that a random person got my snap chat and felt the need to snap me that. I felt odd, uncomfortable and violated.”

A major challenge in fighting sexual harassment is that it can occur any time and any place. “We try to just block it out, but when it happens during play at other gyms it can become a real distraction,” said Senior Varsity Volleyball Captain Amaris Deaton.

While working at a Dallas school, Speech teacher Kim Stidham remembers being sexually harassed. She said, “A man who worked there constantly made remarks to me. I finally had to turn him in to authorities after I had spoken to him several times.”

Sometimes, sexual harassment starts off as a compliment. Mrs. Stidham said, “The first time, I thought it was flattering because I was being recognized. Then it made me feel very demeaned and out of control.”

Senior Brittany Brothers said, “We were walking down the street shopping in Oklahoma City when we were called out to and followed around by two guys from a short distance away. It was very scary and made us think twice about being by ourselves in the city. ”

Sexual harassment even takes place when there are lots of people around. Junior Julianne Works stated, “I was riding the subway in New York and I was in dance clothes. This man walking by grabbed my waist so I switched cars at the next stop.”

The world has become desensitized to sex and abuse as our society becomes less Christ-centered and more “me” centered. Logic and Worldviews teacher Marc Rose said, “The people who do it most, don’t think anything of it because they ignore the feelings and damage of the victim.”

Sexual Harassment in schools is especially harmful. Of those who have been sexually harassed at school: 32 percent of students felt that they didn’t want to attend school because of it, 31 percent felt physically sick, 30 percent found it more difficult to study, and 19 percent found it hard to sleep.

Even so, it’s often not taken seriously, especially by students. According to a recent U.S. study, 44 percent of students who admitted that they had sexually harassed another student said that it “wasn’t a big deal.” An additional 39 percent said they were “just trying to be funny.”

So what can students do? In the study, the majority of witnesses to acts of sexual harassment who did nothing did so because either they didn’t know what to do, or they thought nothing they did would help. However, students can make a difference by reporting any incidences to school authorities and by standing up to their peers who are harassing others, whether it’s in the hallway, online or in the locker room.

History teacher Cindy de León said, “We need a core, brave group of kids to stand up to it and stop it – to say something and use the voice that God has given them. Ultimately, it all comes down to this: Are we willing to live what we believe?”

Research showed that teachers and administrators must play an active role, too. In the journal, Preventing and Countering School-Based Harassment by the Northwest Regional Educational Laboratory in Portland, OR, prevention starts with strong policies, training employees what to look for, communicating to the entire school community there will be no tolerance for it and earnestly investigate reports of sexual harassment.

Upper School Principal Wendy Morris said, “The Student Handbook is very specific, and we take any kind of harassment seriously.”

“The environment at PCA must be one in which all individuals are free to work, learn and develop relationships without fear or intimidation or humiliation as a result of unwanted or unacceptable behavior from others. This includes verbal or physical conduct that denigrates or shows hostility or aversion toward an individual because of his/her actual perceived identity with regard to race, color, gender, age, disability, political beliefs, national or ethnic origin, any other distinguishing physical or personality characteristics, or any other characteristic protected by law. It is essential to the well-being of all that students, teachers and staff members treat each other with due respect for rights, individuality and personal dignity.”

“I feel that everyone should treat one another with mutual respect.” ”

According to the National Women’s Law Center, “Sexual harassment in education includes any unwanted and unwelcome sexual behavior that significantly interferes with a student’s access to educational opportunities. Typical harassment complaints include: making sexual comments, jokes, gestures, or looks; claiming that a person is gay or lesbian; spreading sexual rumors about a person; touching, grabbing or pinching someone in a sexual way; intentionally brushing up against someone in a sexual way.”

Many people don’t realize that these types of behavior are actually sexual harassment. Things like calling someone “gay” in a derogatory manner, making a crude joke, cat-calling, calling an acquaintance “honey,” unwanted touching and certain types of “locker room talk” can all be sexual harassment.

“Let the words of my mouth and the meditation of my heart be acceptable in your sight, O LORD, my rock and my redeemer.” – Psalm 19:14

Much of it has to do with context. Behaviors that are welcome among friends, families or couples may not be acceptable if there is no relationship there. In other words, what may seem funny, endearing or flattering in one situation may be demeaning, insulting or intimidating in another.

God’s standard for the treatment of others is very simple. “So in everything, do to others what you would have them do to you.” – Matthew 7:12.